This one-page article was featured in Issue 24, page 22 of Good magazine (NZ). I like it as it explains what has been going on behind the scenes with Cottonsoft (although I have heard of it in the headlines.) This is why not to buy Cottonsoft toiletpaper - if you like biodiversity, and rainforests. I reproduce it here for benevolent purposes only. 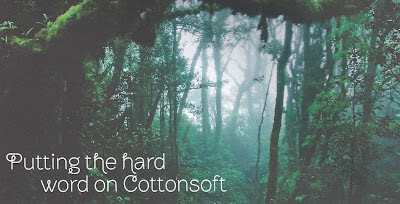 Loo roll hit the headlines in recent months with the epic tussle between environmental groups, led by Greenpeace, and the paper giant Asia Products & Paper (APP), on behalf of their toilet paper subsidiary Cottonsoft. Caught in the middle of the debate are various sustainability certification schemes.

Indonesian-based APP has been targeted by environmentalists for ItS felling of forest habitats essential to the survival of critically endangered Sumatran tigers and endangered orangutans. And APP in turn is part of the Sinar Mas group of companies that have been key players in rainforest destruction for palm oil production.

The campaign against APP began when forensic testing carried out as part of an eight-month investigation by Greenpeace, the Green Party and WWF New Zealand discovered the presence of mixed tropical hardwoods in a range of Cottonsoft products. Cottonsoft hit back, saying the testing was carried out by inexperienced researchers, and did not prove that the wood matenal found came from protected Indonesian rainforest. They also claimed that Cottonsoft retail brands are sourced from sustainable forest locations independently certified by the international organisation Programme for the Endorsement
of Forest Certification (PEFC).

With large parts of the North Island planted in pine trees and other plantation forests, you might ask.why a Kiwi company would need to cut down
tropical rainforests to make toilet paper?

In round two, PEFC told WWF they didn't cover Cottonsoft’s claims of sustainable production Indonsia. And the conservationists pointed out that APP ad pledged, and failed, to switch to 100 percent plantation sourcing of timber for major pulp mills three times: missing self-imposed deadlines to stop using
native forest timber in 2004, 2007 and 2009.

The public campaign has certainly had an impact. In 2011 Cottonsoft laid off seven workers in Dunedin and two in Auckland, blaming it on the effects of the campaign, and has said it will now seek New Zealand’s official Environmental Choice certification for its retail products. In the meantime, another Greenpeace investigation claims to have acquired video evidence of APP timber yards containing large amounts of legally protected ramin hardwood, and PEFC say they are investigating this as a possible breach of APP’s certification.

Consumers would do well to stay tuned, as it appears this particular battle will continue for some time yet.

ENDQUOTE
Posted by Nonavee Dale at 8:16 AM

Email ThisBlogThis!Share to TwitterShare to FacebookShare to Pinterest
Labels: APP, articles, sustainable shopping, Why not to buy Cottonsoft