When I awoke this morning, my head was full of dreams.

The last one was the most disturbing - and is the one I am sharing here.

I arrived back at my family home, the Jones home.  There were open gardens everywhere with seeds and good foods planted in long furrows in black soil.  I saw a closeup of the beautiful seeds in their groove in the soil, full of life.  Shane was there, planting.  My father was working in the gardens as well, on the other side - there was of a low barrier which ran along the centre of the gardens.   It had a roof or canopy overtop.  There were many rectangular gardens full of soil.

Partly obscured by the barrier wall, I saw two objects which we could not plant.  I could not figure out what to do with them.  They did not belong in the soil.  They did not belong anywhere.  When I held one of them straight up that was closest to me, on the right of the wall, I could see by its shape it was a deadly missile.  It was almost as tall almost as me.  It looked like a long pole with an angular shaped spade at the end, all of a grey manmade material.  It was an unnatural shaft that did not belong in the ground.  The other one looked like a space rocket or shuttle.

I wanted to ask my Dad about it, but he got angry at me for mentioning this.  I then got upset and asked why I was always in trouble for mentioning something that was truly there - was just speaking of it.  My mother explained he would be angry at anyone that mentioned it, not just me.  There was also a big feeling of his work around him at this time - his work with early computers.  When he was angry - I could see one of the garden plots was hollow and full of disks, computer things.

It was like a secret - this deadly power that did not belong anywhere. 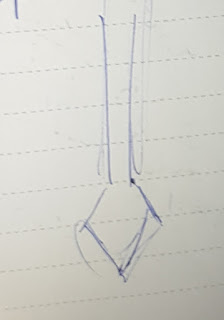