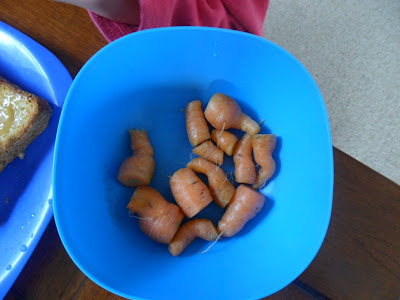 When I first started my garden, I just had to throw all the plants in to get started. The truth is, I am not just gardening, I am gardening, and working, and looking after children so I am sometimes burnt out and tired to learn this new thing. But when I do garden, and become connected to it, I feel really great. Long and short is - I spaced all the plants terribly, especially the carrots. I had forgotten to thin them out, and even to space the seedlings out - and they have grown into each other mangled and suffocated. FAIL!

I won't give up though - even if I have to learn by doing it - that first planting was the get started time - and I know EXACTLY how I will do it next time.

"Carrots take time to really master, so don't give up if your first sowing does not succeed."

"Carrots will grow even in a heavy clay soil but improving the soil is the key to the perfect crop. The ideal soil is light and sandy with well-decayed organic matter that has been lightly limed. This allows the carrots to grow directly and deeply. Fresh composts or stony soils can cause the carrots to become deformed." - Xanthe White
Posted by Nonavee Dale at 10:44 PM 3 comments:

Did you know that there is a Kiwi company that has created a plant that turns smokestack pollution into ethanol, using bacteria? How awesome is that? The company is called LanzaTech. Link to original article from stuff.co.nz reposted below on Nonnie's blog: http://www.stuff.co.nz/business/4681329/Posco-to-try-out-LanzaTech-technology

This comes as LanzaTech signals its intention to undertake a major public capital-raising, most likely in Chinese equity markets, within the next two to three years, in an important step towards its vision of becoming a billion-dollar company within the next seven to 10 years.

The Auckland company's chief scientific officer, Sean Simpson, confirmed that LanzaTech has begun developing a variant of its unique carbon monoxide-eating microbe that would feed on the world's most common greenhouse gas, carbon dioxide.

Posco is the third major Asian industrial partner for LanzaTech since the company signed its first collaboration deal for its heavily patented gas fermentation technology.

Oil and steel producers are aiming to use the the LanzaTech microbe to convert gases from their manufacturing processes, which would otherwise be waste pollutants, into a range of bio-fuels, polymers and other high-value chemicals. The LanzaTech discovery is exciting serious Chinese and United States interest because it can produce high quality bio-fuels without using food such as corn as a bio-mass feedstock.

The New Zealand company had the rare experience of being cited in a White House press statement during last month's summit in Washington between US president Barack Obama and his Chinese counterpart, Hu Jintao.

Posco, a conglomerate that pioneered steel-making at the beginning of South Korea's industrialisation push in the 1960s, produced 33.7 million tons of steel last year. It has already committed itself to new steel-making technologies that radically reduce carbon emissions by avoiding the traditional blast-furnace smelting method.

"The proposed licensing by Posco of our patented microbe and fermentation process fits with our growth strategy in Asia."

Dr Simpson said the company was now working on the selection process to find an equivalent microbe to its main discovery, which makes use of carbon monoxide, which would be capable of converting carbon dioxide to useful new products.

Ad Feedback Such a process could provide a globally important step forward in efforts to capture, store, or minimise the impact of carbon dioxide emissions.

"The potential is extremely significant."

LanzaTech has investment from Warehouse founder Sir Stephen Tindall's K1W1 venture capital fund, one of Silicon Valley's leading clean technology investors, Khosla Ventures, and Qiming Ventures in China, as well as funding from the New Zealand and US governments.

ENDQUOTE
Posted by Nonavee Dale at 2:49 AM No comments: