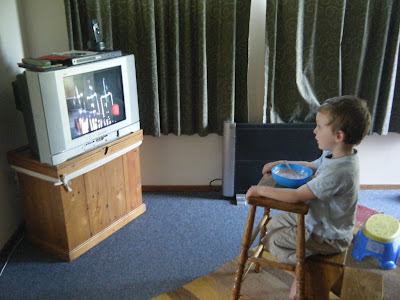 I work from home on my computer, and wanted to play for my son all the great classics from and other old favourite learning shows on the television while I worked. (I would play them directly from Youtube in a playlist, but this requires the use of the computer.)

Did you know you can record videos from Youtube, easily, and using a free program? My brother is a computer programmer; he told me about a program called "Any Video Converter".

Google "any video converter" to find the latest program, and download the free version.

Then you find the option in the file menu to download directly from the internet.  You can enter a URL of the Youtube video. It will start converting and dumps them into a folder in your My Documents.

Then, you just dump all the videos onto a DVD using a DVD burner. And there you have it! It's actually very quick and easy, and very fun. And it's fantastic to hear my son singing ABC's while I work!
Posted by Nonavee Dale at 3:53 PM No comments:

Email ThisBlogThis!Share to TwitterShare to FacebookShare to Pinterest
Labels: for children, How to create a great children's learning DVD from clips on Youtube, things to do with children

There is definitely a revolution going on out there, of people finding their instincts and seeking healthier lives. Many of us live lives so much more disconnected from nature than that of our parents and grandparents-- away from skilled resourcefulness, towards a greater use of technology and energy resources instead of using our own energy. Ironically, we still need exercise and to feel skilled, and proud of what we do, etc, so we do funny things like drive to work then go to a gym (which also requires power equipment), and various hobbies. Wouldn't it be better to work less, and dig up the backyard into a garden, cycle to work, and quit the gym?

"USA
"Human-powered gym
"Pound the road to nowhere at your gym for long enough and you’ll start to wonder: where do all those watts go? And why can’t they go somewhere useful, like powering this damn treadmill? One gym in Portland, Oregon has decided its members are up to the challenge.

"The Green MicroGym runs on people power, with a bit of solar to keep things going when the human hamsters run out of steam. With ‘team dynamo’ classes and spin bikes, the gym can generate up to 41 percent of its own power. Workouts fuel the gym’s ultra-energy-efficient ceiling fans, TVs, lights and ‘EcoPower’ treadmills.

"The downside: there are no showers at the gym, to keep water and power usage low. Still, we can’t think of better motivation to pedal fast than to keep the fans turning."
Posted by Nonavee Dale at 11:52 PM No comments:

The Kon-tiki expedition: by raft across the South Seas, by Thor Heyerdahl. 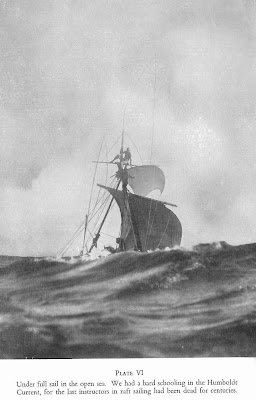 This book is about a man who sailed across the ocean from South America to here, the South Pacific, on a raft. He and 5 others made the journey to prove that Maori and other Pacific peoples may have travelled from South America long ago, when they only had balsa-wood rafts (stone-age).

It's an amazing adventure, travelling this close to nature, their boat gains pilot fish just like a shark's, flying fish land on their deck every morning which they fry for breakfast, when they are bored they pull sharks backwards out of the water by their sandpapery tails. It's one of those really amazing one-with-nature experiences.

Read it online here, or find it at a library near you if that's easier.The Kon-tiki expedition: by raft across the South Seas, by Thor Heyerdahl. (1951)
Posted by Nonavee Dale at 11:44 PM No comments: 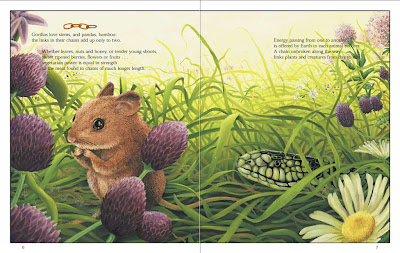 For kids-- this explains about the cycle of life in the food chain. Even I needed to understand this-- we are now so disconnected from this cycle.


"Passing the energy needed to live, is a difficult thing for a creature to give. But a chain unbroken along the way, links life in the woodland from day to day."


How plants make energy from the sun, and the animals eat the plants, and also about carnivores.


Ends on a note of conservation. My kids love this one, it's a favourite (but I do simplify it for the little ones. "Look out weasel. Here comes fox! Look out, fox...) 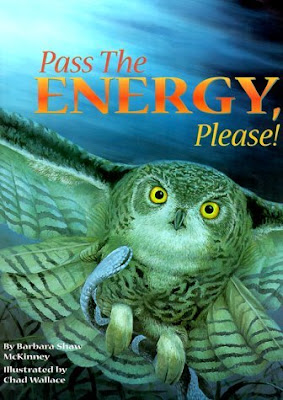 Pass the Energy, Please! Written by biologist Barbara Shaw and illustrated by Wallace.

Posted by Nonavee Dale at 11:42 PM No comments:

Email ThisBlogThis!Share to TwitterShare to FacebookShare to Pinterest
Labels: books for children and other real people, Pass the Energy Please by Barbara Shaw McKinney

My Simple Life in NZ by Adele Stewart

This is an exact description of her life and daily activities while settling New Zealand's frontier, from 1878-1906. (She later returned home due to difficulty in getting help in her remote area in running her family farm). Learning as she goes, this treasure contains recipes for bread (making the yeast yourself), vinegar (follow the recipe and just leave it for a year). She raises chickens and is an expert gardener (plant seeds in eggshells, and deposit the seedling directly in the soil leaving the eggshell, the calcium will benefit the plant and roots remain undisturbed), keeps bees... Inspiring just to hear how people used to just have to do things. None of this researching and doing things the perfect way they are done. If you didn't have a floor, just dirt, you threw shells down until you did. Inspiring in making you feel like you can do anything.

Read it here at http://www.scribd.com/doc/17593138/My-Simple-Life-in-New-Zealand-by-Adela-Stewart

Posted by Nonavee Dale at 11:05 PM No comments: 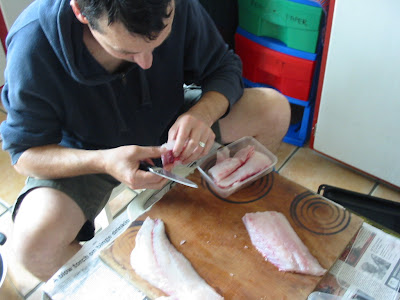 My husband I and just had a conversation while he was cleaning fish, which was of a subject that my thoughts run across all the time. His father always boiled the fish heads to feed to their cat, he never threw them away. Every time Shane cleans fish he feels very guilty about throwing away so much of the fish, and just eating part of it. He just caught some beautiful very big snapper, with their magical blue spots. We are going to boil the heads this time, and not waste the fish. His father hadn't "slipped down" to that level of wasteful behaviour, and if we don't as well, we are not slipping down -- the skills of his generation won't be lost by us.

I was talking to him about the native American people (First Nations, "Indians"). When our culture first had contact with them, there was a real contrast of our culture with theirs, the modern path we had taken, and the way we all used to live. The native women, I still have this impression burned into my mind from when I learned how the native women would use all the parts of the buffalo, they wouldn't waste anything. In contrast, we have become very wasteful. I just have a really beautiful image of that-- the women being so careful and resourceful. 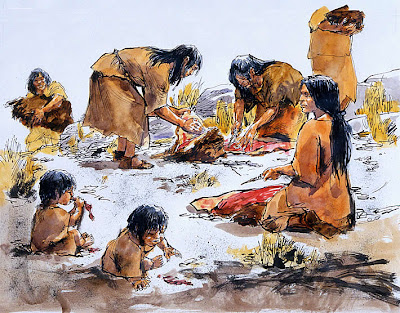 Painting by Charles Shaw, found at this link: http://www.texasbeyondhistory.net/kids/hunting/mass.html

[Shane slices away the strip in the fillet containing the bones and throws it into the pot, already very full.] "See? Now that would have been wasted." It just feels wrong to waste the life of that beautiful fish. 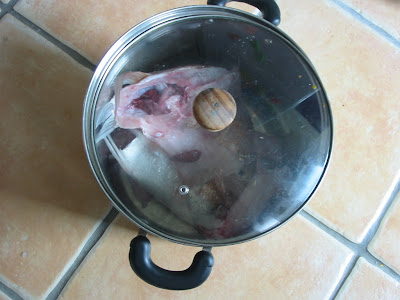 P.S. One thing I am proud of is that I have continued to keep my one good knife sharp. When Shane needs to clean a fish, I sharpen it. It's that one step forward and I hold onto it....
Posted by Nonavee Dale at 3:48 PM No comments: