Feeling the stillness in Stillwater 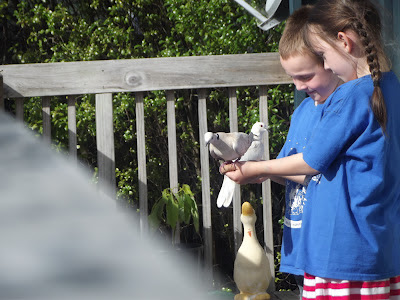 There is something special about touching another living creature.

Usually I feel too rushed doing the next chore, or working on a work project, to take a moment to feed the birds by hand as I encouraged my children to do.

Recently, feeling a little bit of depressed one day - I took a moment to do this.  I felt a thrill as eight of the wild dove touched down on my hand, and felt his dry little scratchy feet.  It was like touching another part of yourself, another part of God in another creature.  Another part of the Greater Spirit.  I felt uplifted.

Taking that moment to feel our world, is probably a source of unhappiness for we often unhappy people of the world.
Posted by Nonavee Dale at 9:40 PM No comments:


Found at http://www.nbr.co.nz/article/forest-and-bird-rejects-joyce-call-stands-firm-appeals-wb-129471 on September 26, 2012, by The National Business Review

BUSINESSDESK: The Royal Forest & Bird Protection Society will press ahead with appeals against resource consents for Bathurst Resources' proposed open cast coal mine on conservation land in the Denniston Plateau region, above Greymouth.

Some 220 of the 440 job losses at Solid Energy will be at Spring Creek. Bathurst says it would employ around 400 people at the Escarpment mine, the first of several Bathurst plans in the area.

However, Forest & Bird says Mr Joyce "is being opportunistic in deflecting the blame for the mismanagement of the Spring Creek mine".

"I feel for the people who are losing their jobs, obviously," Forest & Bird advocacy manager Kevin Hackwell told BusinessDesk.

"That's a real issue. But mining is a boom-and-bust industry with a long history of it on the West Coast. It's one of the reasons their economy has never been as strong as they would like.

"The long-term future is having industries that are much more sustainable."

He questioned also whether Mr Joyce's intervention in favour of Bathurst's proposals could put the minister foul of the legal process playing out through resource consent appeals, and the statutory process that would follow if Bathurst succeeded and sought ministerial position for an access agreement to Department of Conservation land.

"There would be a serious question, given his public advocacy, about whether such a decision has been influenced by government policy," Mr Hackwell says.

Bathurst chief executive Hamish Bohannan has reported frustrations among shareholders over delays to the Bathurst consent process, saying the company has spent $15 million so far on consenting issues.
Posted by Nonavee Dale at 3:41 PM No comments:

The one thing I do to prevent plastic waste, that actually works well - both for environment and for my family - is simply to bring reusable hard plastic containers to a butcher or supermarket meat counter.  They can tare the scale to zero, then put in whatever I am buying.  The plastic disposable bag is then unnecessary - the repetitive waste is out of the loop.

Then you can put the containers in the freezer as they are. Ha ha.


(I do sometimes get complaints if I use the meat container to pack a lunch or something.  Best to keep these ones as meat containers only I guess.)

Recently though - the grocery store they built which was closer to our home was made without a meat counter, and the butchery I went to closed (likely put out of business by the grocery store, which did have alot of meat - just all on polystyrene/styrofoam trays).  So I was SOL.  And driving for a half hour to go to a grocery with a meat counter would not get me anywhere as I would, too ironically, create more greenhouse gas pollution.  But I am proud of the fact that I went and explored and found a new place to go and do this, a pretty close drive away in our 2nd nearest shopping area.  The Butcher Lady in Orewa, NZers.  She'll even let me text her to  make sure she has what I need unpackaged.

So just explore - I am sure you'll find a place near you that will let you do this.
Posted by Nonavee Dale at 5:00 PM 2 comments: 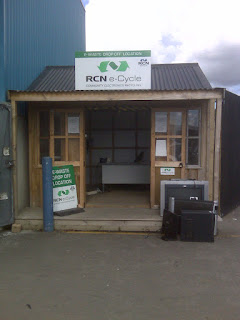 There are many companies recycling e-waste now.  I just had the coolest experience a month or so ago.

I ruined our computer monitor by spraying too much water on it when I was cleaning it, and we also had an old computer to recycle, and a broken heater.  I looked up a local e-waste recycler that had been doing some advertising at my kids' school - RCN e-cycle.  There were others, but I chose a larger more mainstream one that was actually close to us, to add my little activity to the larger stream, if that makes sense, to support this future way of doing things to the best of my ability.

They took the computer and computer monitor for free, and charged a minimal charge for the heater - and after taking them apart, will recycle every last bit they can down to the wires (or reuse).  Right on.  The relief I felt at getting rid of that stuff properly was palpable, lending to a spring in my step (oh yes).

Wherever you are, look it up - I sure you'll find an electronic waste recycler near you.
Posted by Nonavee Dale at 4:44 PM 2 comments:

How to prevent weeds without using plastic weedmat 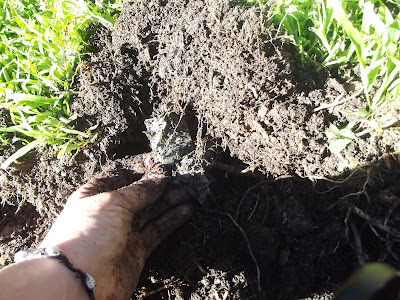 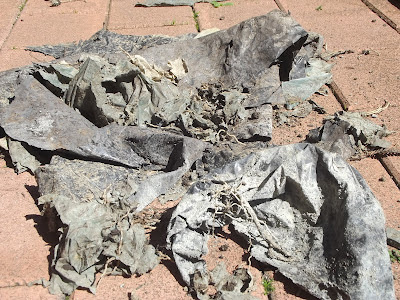 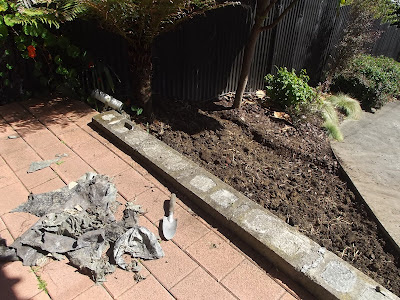 Look at all the plastic waste I cleared from just one little section - plastic weedmat left behind by prior owners!

In New Zealand, if you don't prevent weeds in your garden (yard) they just might grow larger then you! With all the lovely sunlight pouring down, and rain, the biggest challenge when gardening is helping the right species flourish, as every species crowds in where it can. Unless...

Non-breathable plastic weedmat (straight plastic) is not a good choice for preventing weeds for this reason. As a weedmat it soon becomes uneffective anyways, as new soil forms over top of the weedmat as plant matter breaks down on top of it. What you end up with is a sandwich of soil, then a layer of plastic pollution, then more soil underneath (but compacted and straining for oxygen, with no earthworms).

A better choice is anything that breaks down, like jute weedmat, or they even have wool weedmat here in NZ. But these options are expensive. Some people suggest using a thick layer of newspaper - but in my experience it goes all over the place. We did try something called "Geocil", my husband bought it because it was affordable and does break down. But to a perfectionist (such as me) that's not perfect - although breathable it is made out of polypropylene and will cause some pollution to the soil as it breaks down. (The plastic separates into smaller pieces that you can now see are made up of many strands - until you grab them and dispose of the pieces bit by bit into the landfill anyways.  Not a great solution at all.  See photo below.) 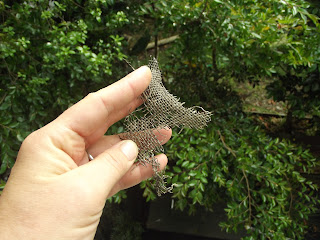 From my feel for it, and seeing forests, and also suggested by horticulturalists - you can avoid using weedmat at all though by using ALOT OF MULCH. In a foresty garden, mulch is bark nuggets, or best ever - pieces of ponga log. In a veggie garden straw, or hay is great for nitrogen release. This represses weeds without choking off the air that the soil needs, and keeps the soil from drying out - making a lovely cool environment for worms to flourish.

Mulch is a great option for hot and dry climates too. My sister-in-law Iris is a great gardener who lives in near San Diego in Ramona, California, where the growing season is very hot and dry with less than 12 inches of rainfall per year (300 mm). She can't swear enough about the value of using mulch on her veggie garden for preserving moisture (and preventing weeds).

For more about weedmat and soil, check out this page: Greg's Indigenous Plants and Landscapes, a website about environmentally friendly landcapes by Michael Hough, Professor of Landscape Architecture, from York University, Canada. He really goes into depth about the subject.
Key points: "Plastic weed mat was widely used to suppress weeds for revegetation projects during the 1970's and 1980's. However it use is now largely viewed as a disaster and has been replaced by biodegradable weed mat.
"Unfortunately the landscaping industry and the gardening public did not get the message. Woven plastic weed mat is still used widely by the industry and in worse case scenarios black builders plastic is used as a cheaper alternative.
"Plastic weed mat will cause many problems for your soil and your garden: