I was putting back some bottles that had fallen out of a recycling bin, and I saw a chucked-away clock. It was a cheap Chinese clock, the kind that will function barely, until it breaks in a few months, black plastic and a battery. However, I could see that it would make a great toy for the children to play with, and learn to tell time.

Of course 4 and 2 is really too young to learn to tell time, but they were fascinated with actually being able to touch the clock hands themselves, after I took off the glass and plastic frame that held it, with the help of a glasses screwdriver. We sat waiting for the bus (free time), and I promised Troy (4 yr old girl) later chocolate if she tried to guess the numbers the hands pointed to. Well, first I put the glass and frame on my face, and made strange voices, pretending to be an astronaut in space to make them laugh. But she loved the game of guessing the clock's numbers, and it was a very effective learning lesson. Later she compared the numbers to the mailboxes as we walked along, and counted from 1 on the clock to the number on the mailbox verbally to learn what the number was called. 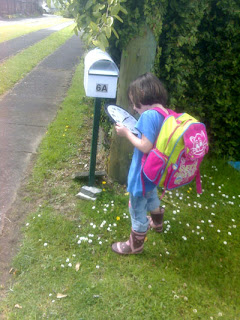 Just another green idea.
Even the glass plate on it's own is a beautiful thing. A perfectly round piece of glass. Shall I decorate the plastic frame, and use glass and frame for a really cool picture? Or use it as a window? Or...save it in the arsenal of magic and useful objects.
Posted by Nonavee Dale at 12:56 AM No comments: