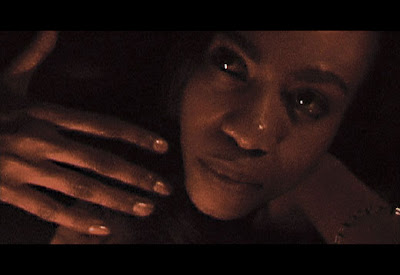 Screenshot of Eliza, a special woman of Tanzania.

Darwin's nightmare is a must-see for we who live in privileged countries, like NZ, Canada, USA, England.... My husband, Shane, inexplicably brought this video home one day-- I am usually the serious, heavy-going one, but he ran into this movie and for some reason was drawn to take it home.

Synopsis: In Tanzania (said Tan-za-neeya), North Africa, there is a huge lake called Lake Victoria. It used to be populated mostly with "cichlids", fish that evolved with the lake and kept the eco-system healthy by eating algae. In the 1960's someone introduced a species into the lake called the "Nile Perch". This fish is a strong predator and completely took over the eco-system, until all 270 other fish species were depleted from the lake. (The eco-system is going to collapse one day, as the waters get murkier and murkier, and Nile Perch cannibalize themselves.)


The people decided to export the Nile Perch fish to Europe, and the World Bank loaned them money to create Nile Perch factories. It is the main industry there now, and two planes leave Mwanza (a town on the shores of Lake Victoria) every day full of 500 tons of finely packaged Nile Perch fish eaten in Europe.


However, the local people of Mwanza can't afford the fish themselves, with the highly modern and expensive processing that takes place so it will be acceptable as an export to Europe. Most of the local people are VERY poor. They actually eat the fish carcasses after the meat has been stripped at the factories, with the little meat left on them, which is thrown out into a big nasty pile. There are local people-- and this was the most disgusting and horrible thing-- walking through rows of fish carcasses drying in the sun, through an ooze of mud and maggots. The ammoniac gas from the fish drying had burned one employee's eye, which she hid under a head wrapping-- it was sealed over. They were afraid of getting into trouble by complaining at all, they were pretending they were happy as they stepped in the maggot ooze, but the woman with the damaged eye had more to complain about I guess. 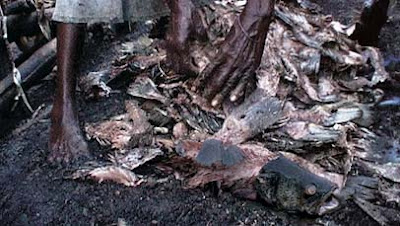 What many local people are forced to eat in Tanzania.

Also, because the people were so poor, many women turned to prostitution to the airplane pilots coming and going, to support their families. One such woman they interviewed, Eliza, was treated roughly by the pilot in the room with her, he grabbed her with no respect to get her to come. At first her face was upset, but she quickly covered it up with a mask-- she started to sing for Tanzania. It was haunting. It was as though she was showing how special her spirit was, and singing for the spirit of her country, as well. Before the documentary ended, she was actually murdered by an Australian client-- who stabbed her. They had interviewed her a few times, and she was such a special person. I can still hear her singing her song about Tanzania.


Last but not least, as part of the true nightmare were the deserted street children that existed around the lake. They were very poor and starved, and would melt down the plastic fish packaging, and sniff it to knock themselves out.

This documentary really touched me. It wasn't right, that Europe would send an envoy to make sure the fish they were receiving was at a high enough standard for them. I believe if the people there knew about this, they would never eat the Nile Perch fish again. It was ironic that if all the factories were not there, and the local people were able to just feed themselves with the fish, they would have good livelihoods. There were just a few fat greedy businesspeople profiting from the situation, but many people suffering.

Oh yes, and I forgot to mention-- the planes did not return to Tasmania empty each time. They usually carried ammunition, guns, that fueled the wars of Africa (like in Uganda). One good-hearted pilot admitted that one Christmas it made him sad that he had picked up grapes from France to go to the children of England, after having dropped off tanks for the children in another less fortunate country in Africa.

Why is this film great? It puts things in perspective. Here I was, finding making rainbow cats out of old sweaters important. We have to know how privileged we are in a country like NZ (or Canada, etc), and how lucky we are to have education. One of the huge issues we could see in the documentary was that darkness of not being educated. One bodyguard even wished for war, and that honourable past-time of overcoming others-- and apparently many wish for war and even the foreign aid it would bring. There was such darkness in his eyes... If the people had education, perhaps they would be able to take back their country from serving foreign interests...instead of fulfilling their own.

I definitely will never forget the people in this documentary. I don't want to forget about them.

=> I just looked for Darwin's Nightmare on Youtube while looking for her name (Eliza), and found this translation for her song:


To hear her song:

khaarl He/she said that since he/she saw the film he/she cannot take this song out of his/her head. And that this song makes him/her feel sad whenever he/she sings it.
I understand it. I feel exactly the same. It﻿ was one of the hardest film I've seen in my life. Just like an injection of reality.


Posted by Nonavee Dale at 8:28 PM No comments: