You know how these balances, or relationships work, such as you really enjoy your holiday because you have been working very hard...waste not want not...you reap what you sow...what goes around comes around. I am fascinated by these relationships, and try to observe and learn about them.

One I have observed in life is that if you have acquired too many possessions, so does the pressure and complication build. You can feel pressure for your children to appreciate your sacrifice which was too great, and for me, complication in managing all those items.

Why have the stress? Sometimes the goal we are trying to fill is not actually fulfilled by the choices we make.

A full life for our children is usually one emptier of possessions, and fuller of imagination, the natural world to play in, full of more space. Even the opportunity to create something yourself is very important, instead of having everything, especially for learning minds.

For having some possessions, I am very grateful though. I remember having little money and how important they were. But as you gain more, the level of value drops off exponentially.

How cool to create ornaments, or gifts for your friends that take imagination, and mischief. How beautiful to make things, paint pictures-- actually it should just be from your talent area. Or to do loving things such as donate to those who are in need.

The family I grew up with always had a materially light Christmas, and often little kids gave their toys to others, or we did make alot of things. We wrapped our gifts in newspaper, proud of our complete no frills attitude. But we hung out together and had alot of fun in our family working, doing things like making candy, going to the forest to cut down our own Christmas tree, and playing with our brothers and sisters.

Although at times growing up I felt that our family was too strict, we had to work hard, and that sometimes was rough that we didn't have many frills compared to our friends-- now I just feel incredibly lucky to have always been given what was really important, instead of what was not. 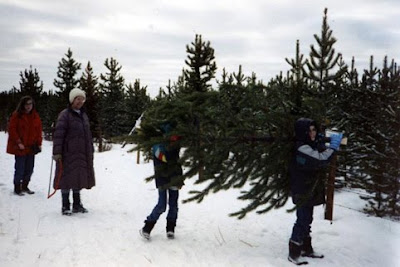 Posted by Nonavee Dale at 6:00 AM No comments:

Putting out the Tomatoes 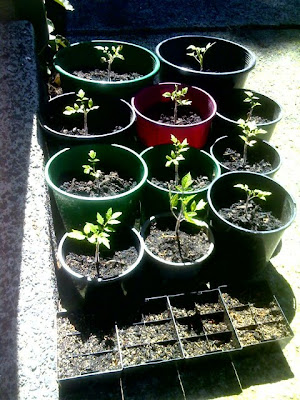 I grew these ones from seed, in little trays at first, using seed trays left from buying seedlings in the past (six-packs of little containers attached together like the ones in the foreground of the photo above) and planting the strongest seedlings in larger pots later when they got bigger. I hope I have a garden soon to plant these into by the time these get big!


I just love how the they soak up the sun, it feels like my own body is soaking and using the sun instead of wasting the energy. 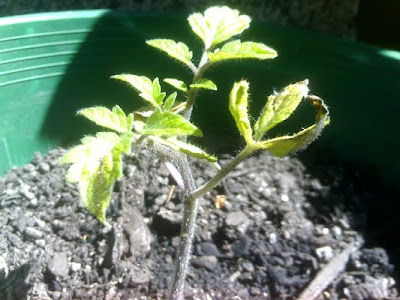 Posted by Nonavee Dale at 3:03 AM No comments:

Turning off the TV

The other night, we turned off the TV instead of letting it blare during the evening like we usually do. It was really amazing to notice how, when our minds are not engaged in this passive form of entertainment, how the family starts to talk, and play, and entertain themselves. I loved listening to the family sounds pick up just because the TV was off.

It really makes me question having that thing on all the time. I find interacting with my family so much more valuable.

We made crepes (said "crapes"), a thin pancake, and made them into wraps filled with vanilla ice-cream, and drizzled with chocolate sauce. I think it's the making of something that in-itself creates the good energy. It brought back the happy family time I spent with my family-- they were always making something. That empty space, with no TV blaring, gets filled with something far better.

It's often the parents that put the kids in front of the TV -- because you want to involve their attentions, instead of you having to tend them, and maybe you are busy doing chores and don't want to be distracted. Also, ironically, they often can't just run outside because the space outside is full of cars and strange people. So it's we who mind their attentions this way, and teach them to love it. It takes the fight out of them, as it occupies them so. As it keeps the adults out of trouble...

P.S. (Added June 13.) Like in Pink Floyd's "The Wall", it's the Moms that bind the children. Why do I often turn on the TV? It occupies children that are cooped up in 4 walls and being very demanding on the mother. It's not how "educational" the show is, it's the nature of TV being too giving, you sit there passively, not creating or using your own imagination. This is the way we adapt our children to city life and TV-- mothers do. But it is great to just be aware of this, and just try to listen and be honest with yourself about when you are meant to turn it off...
Posted by Nonavee Dale at 12:48 PM No comments:

Helping Hand for our Whanau in Cambodia

When I travelled with a four-year-old a few years ago, the my friend's daughter, she was saying all these wonderfully wise and prosaic sounding things. The most amazing one she said was this seeming realization: "God...and God in me! Same!"

Her natural sense was right-- the deepest spiritual level I have gotten to seems to be that God is in everything, and also in us. In the past, when people have helped me, and been incredibly generous because they recognised our family needed help, it was the God in them, recognising that and being inspired to help. Just now, I spoke for some people living in Cambodia that needed help, and my spirit guided me about who to ask, and when. (My friend Helen is travelling there now, and ran into many people living in poverty, some of whom she has been able to help.) It's the God in me I was listening to. 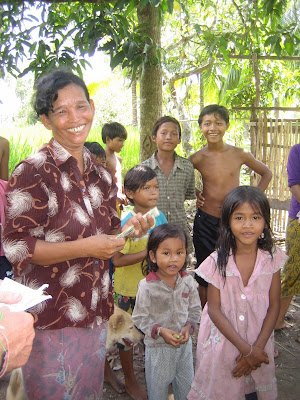 Above: Grateful people in a small village in rural Cambodia, after receiving mosquito nets they couldn't afford, to prevent malaria, and also some food aid.

If you want to know exactly what I'm talking about, my friend Helen, a girl who had been involved in sacrificing a large amount of her personal time for years handling the funding for the Kaipatiki Project (a conservation and education community group), took a break from her unhealthy life working behind a computer all the time(she also worked as a medical transcriptionist listening to recordings of doctors giving medical diagnoses, from overseas, and typing what they said!) and went travelling.

After seeing some amazing countries, such as Turkey, she went to Thailand so she could stay away longer. Of course the countries where her money would last longer had more poverty, and before long she was caught up in helping orphans, and in microloan projects. When she visited Cambodia she saw great poverty in the rural areas, where the children have to work very hard scrounging in the rice paddies for food, and malaria orphans children. Mosquito nets only cost a few dollars, but it's more than many families can afford.

With money from her family, and mine, she was able to buy a village 47 mosquito nets. However, I was really touched by the situation, and I told my family in Canada about it, and my sister Sabynthe raised money, and my sister Wendy contributed, resulting in about $500 NZ to contribute to the poor villages there, carried out by Helen in person. Her partner raised some money through his connections and family, and I also felt inspired to ask the Kohanga Reo Whanau we are a part of through my kids. So that's another jar!

I am so excited for Helen getting involved in microloan projects (a sustainable solution to the poverty there), and proud of my sister Sabynthe's good-hearted fundraising from her friends. It seems that for fundraising --like teaching of good eco-habits-- it's better to do it close to home.

She currently on her way to deliver a van full of ceramic water filters and mosquito nets to the Krosang Village in the Kampot Province, which will allow them to stay healthy while they fight forward with their lives. But the microloan project, allowing them to buy small parcels of land or weaving looms and so on, is the really long-term solution which will help them continue to provide for themselves in the future. 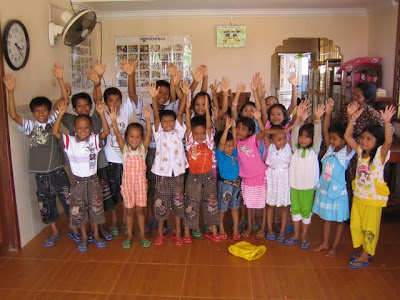 "Children at Narith's orphanage - transformed in the new outfits we gave them..." 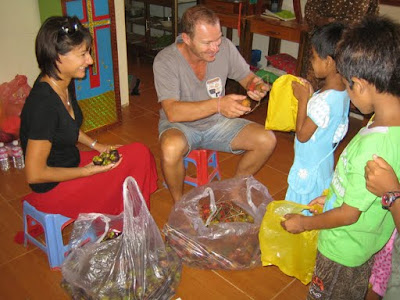 Something else that my intuitive self tells me is that it's better to help to balance the parts of the world which are the most unbalanced first. That is, it's a better use of money to help areas out of the cycle of poverty, and help them to find strength, instead of filtering money to projects within wealthy countries. As tough and cold as that seems, I just view all of us rich people here, some of whom are ill, and those expensive projects we have to save every last man, vs. the countries where just a little bit of our money would go so far.

The biggest problem, in fact, the only real problem that it faces today is that it is unbalanced. Restore the balance, and we don't have any "problems". The salmon will again swim upstream, die, and their deaths enrich the soil of the forest where they die. We will always die, but because of that other life is possible. There is no further "ahead" that we can get than that.

Update from 2011: This is when I first learned about microloans - it was the best thing to come out of this. Helen used the money we raised to buy some emergency food, water filters - longer lasting help - and someone came with them to teach them why it was needed, but most importantly, loaned money through a local village authority to people needing money to start small businesses. One group used their microloan to build a chicken coop, which would then support them with the sale of eggs. After the money is paid back, it can be loaned out again and again to people in the village, managed by local people themselves. How great is that? Clever Helen. Microloans -the best way to go. 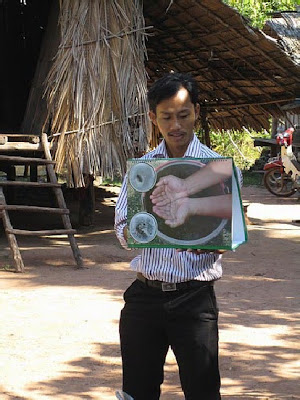 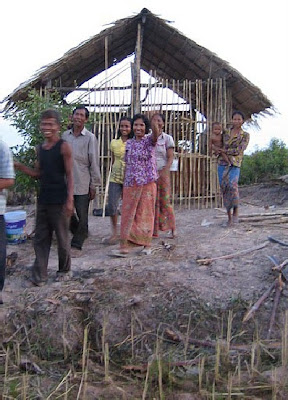 Posted by Nonavee Dale at 11:44 AM No comments:

Bread Crusts for the Birds

Every day I make lunches for my children and my husband, putting sandwiches into reusable plastic containers, and yogourt is poured from a large carton into plastic reusable containers as well. I just had a good idea recently, as apparently the teachers at their preschool have to throw away all their crusts every day into the rubbish (ultimately the landfill) as the kids don't like to eat their crusts-- there is a big pile of bread in a plastic bag on the kids' tables every day that could be diverted from landfill.

I cut off their crusts now when I make their lunches, and throw them out the back window for the birds right away so that the less eco-friendly teachers don't have to worry about it.

(Bread doesn't go in the worm farm, and I don't have a compost bin yet.) 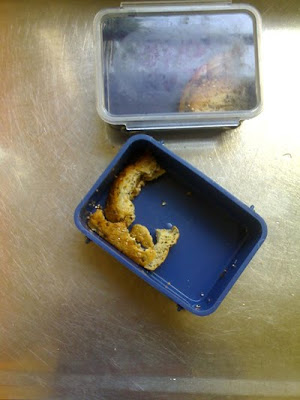 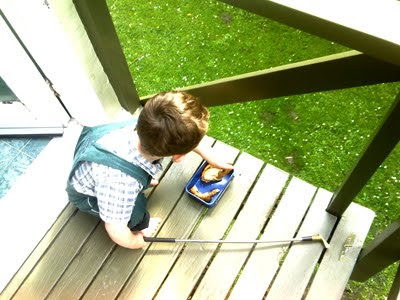 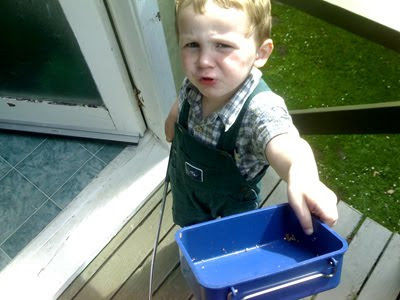 I often get the kids to throw uneaten bread into the back yard themselves. It's a great activity for them!


P.S. (Added June 13, 2010.) Birds also love cooked rice. Don't throw uneaten rice into the landfill! Set it out on the footpath or driveway for the birds. They will have a big party, calling out to all their mates.

I just ran into Buffy Sainte-Marie's Native Canadian (or First Nations) Cree singing on a Sesame Street Youtube clip. I just love it. I could listen to it a million times.