How to make quick hummous (without all the plastic containers) 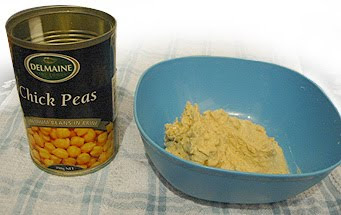 I can't believe how easy this is! Instead of making a large ordeal out of it, this is the recipe for making hummous as you need it.

Blender or equivalent and...

1 can of chick peas(these are already cooked)
100g Tahini paste(the jar I buy is 300g, so 1/3 of the jar)
2 garlic cloves
Juice of 2 lemons
1 teaspoon salt
Plus any spices you want to experiment with

Add together and blender (I cut up my garlic cloves first).

Usually I made a big production out of it, getting dried chick peas, soaking them overnight with baking soda to make them cook more quickly the next day, cooking a big pot of them for hours (too much too eat right away). As a result, I NEVER MADE HUMMOUS. OR you can go out and buy a few cans of cooked chick peas-- directions for hummous usually on the can. Quick Hummous without all the plastic containers.

P.S. May want to try: my gourmet-oriented husband also added a dash of balsamic vinegar dressing, which was really good. Or experiment with spices...

Now that I am much more functional in the kitchen, how difficult is it to cook a few cups of dried chick peas for a few hours, really?  The problem was the baking soda, and not having any sense of how to cook dried beans.  Just get a few cups and cook them until you TEST them and they are soft.  Just like cooking pasta - but takes a bit longer.  (You don't have to stick around...)

So whether if you are scared of cooking beans - use the cans instead of the plastic containers at least, although they do have a slightly metallic taste.  For best results though, get some dried chick peas from a wholesale food store, or section of a grocery store (to avoid packaging) and cook'em up.  Great too for food storage - ability to be self-reliant goals.
Posted by Nonavee Dale at 12:26 AM 4 comments: