Horrified by the mountain 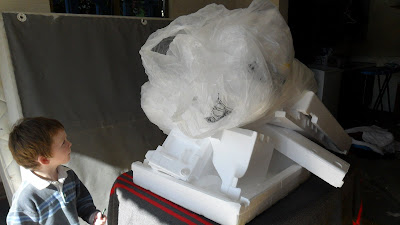 ...of crap that came with our new dryer. AND the mountains of cling-film that came with our new couch. I didn't expect it, so it wasn't avoided. I would rather the couch had come dented and dirty, truly. But worse than a huge ball of cling film was the mound of polystyrene ("styrofoam" in Canada). That stuff never goes away (doesn't break down). I find it almost criminally irresponsible that it is still used.

Step 1. Phoned the appliance store that sold me the dryer to ask if they would take back the polstyrene. They wanted to help, but would only throw it in the rubbish instead of me. They said that the manufacturer wouldn't reuse it.

Step 2. Researched alternative places that would recycle it. There were only two places locally. One was Expol, which makes and installs polystyrene insulation under floors.

At first I was going to take it there, but now I am having second thoughts. Why contribute to a business that creates more of the same problem? We don't need polystyrene under floors either, where it will also one day be a waste problem.

Step 3 is going to be calling Haier directly, and asking them to take back their perfectly "good" horrible packing material. If they don't take responsibility for it, I can start communicating with them and making some small change there.

Small change, anyone? Watch this mountain.

Update 16 August 2012.I ended up getting tired and overwhelmed, and...I should have done something about it, but I just wanted you to know I actually didn't.

Companies are changing though, so if I ever do get a new appliance (which I will, we will need a better water saving washing machine, and dishwasher at some point since we live on tank water), I will stop it at the source and tell them I don't want the packaging. I can at that point make sure the action is accompanied with letter or even a Facebook comment. I have helped create action with Pak'N Save before by nagging on Facebook from time to time (about Fair Trade bananas). There is nothing wrong with communication structures like Facebook for companies to communicate with the public. Then, actually, their marketing communications team has to figure out how to respond to it officially - which is a good thing.

In fact - I should make a comment right now...far easier than writing letters (and more effective too). 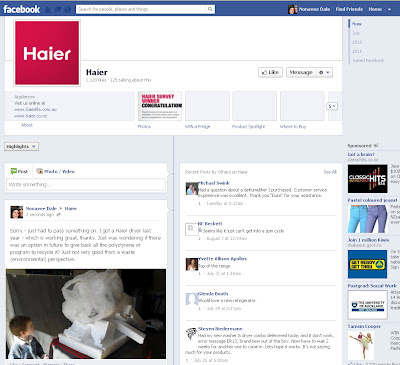 How hard was that? Posted the photo above, and: "Sorry - just had to pass something on. I got a Haier dryer last year - which is working great, thanks. Just was wondering if there was an option in future to give back all the polystyrene or program to recycle it? Just not very good from a waste (environmental) perspective."

It's good to be nice. If it's not said with love, would you listen?

Hey, they got back to me!

"Hi Nonavee, in NZ most retailers have some form of recycling available at their warehouse operations. We are more than happy to accept your packaging at our locations in Auckland or Christchurch (13 Kerwyn Ave, East Tamaki Auckland or 79 Shands Road Hornby, Christchurch) and will recycle the packaging and old Haier appliances as well if required. :) Hope this is helpful."

That is great. If only I contacted them directly at the time. I could have shipped it or taken it over there... which although it's a pain in the butt would assist in their process of learning to deal with it. Next time -
Posted by Nonavee Dale at 5:19 PM