Adapted originally from Jim Lahey's method, and Peter Reinhart - the process further refined by my parents who then showed me - some minor modifications in baking timing by me after reading The Mini Farming Guide to Fermenting by Brett Markham.


At first I thought they were making this kind of bread because it was easy - but it also tastes better, due to the slow brewing of yeast in the fridge.   In his retirement, my dad was searching for how to make bread as good as the crusty bread he had had in France.  One important factor is the high protein flour they use - so check that your flour is of high protein.

The dough is very spongy, full of air, and you try to touch it as little as possible when you shape it and bake it. (It's also sticky). The final bread has lots of holes in it.   Disadvantage: your jam might leak through.   Advantage: tastes great, uses less of the expensive ingredients such as tonnes of yeast with bread improver (when I use my breadmaker), or sugar.   Also, no machine or hard labour is necessary.

This method is also featured in The Mini Farming Guide to Fermenting by Brett L. Markham.  He is a chemistry person, but also a self sufficiency person - in his book he includes photos, and offers a much needed explanation as to why this method of making bread works.

From the chapter called, "Artisan Breads on the Stone":

"Artisan breads hove traditionally been time-consuming to make, but the combination of two innovations allows you to make no-knead bread in as little as five minutes a day. The first innovation was introduced in 1994 by Jim Lahey of the Sullivan Street Bakery in New York City. This was the incorporation of a substantially larger proportion of water into the dough and allowing longer sitting times. This allows the gluten chains to link without kneading.

"The second innovation was introduced in 2007 by Jeff Hertzberg and Zoe Francois, and consists of the simple fact that dough made in this fashion can be refrigerated. When the two innovations are combined, you can make delicious artisan bread in mere minutes.... The core idea of the method is that if you make a very wet dough and set the dough aside in the refrigerator, the gluten chains will interlink on their own over time, thus obviating the need for kneading the bread to obtain a good consistency.

"The dough can be kept in a covered container in the refrigerator for up to two weeks, and all you have to do is take it out, cut off a portion of it, let that portion rise, and then pop it in the oven. Over time, as you save portions of the dough from previous batches for your new batches in the same bowl,  your bread will develop its own sourdough character without need for maintaining separate sourdough cultures."

Also, says Markham, and this is really fascinating:

"Artisan bread has only four basic ingredients: flour, water, salt,and yeast.  That's all. Nothing more is needed.  Bread made in bread machines needs to rise rapidly, so sugar is included so the yeast will have immediate access to food.  Because the dough for artisan breads is allowed to sit, during which time a certain amount of autolysis occurs, some of the starch in the flour is naturally converted to sugar.

"Salt is used in bread for two purposes. The first is to limit the activity of the yeast so you don't wind up with huge air gaps in your bread. The second is to strengthen the gluten. The yeast used for bread is the same species as that used for wine and beer, but the specific variety has been selected for baking purposes. The yeast eats sugars and makes alcohol and carbon dioxide. The carbon dioxide makes the bubbles in the bread, and the alcohol evaporates during baking.

"A potential fifth ingredient can also be included, and that is lactobacillus lactic acid bacteria. Lactobacillus can live symbiotically with bread yeast. When it does, it turns the alcohol byproduct of yeast into lactic acid, which gives sourdough bread its flavor. The lactic acid helps to preserve the bread and gives it a shelf life that is nearly as long as that of commercial breads containing preservatives. Up until the 1800s, practically all leavened bread was sourdough because yeast and lactobacillus as separate organisms were unknown.Once the difference was discovered, yeast was cultured by itself for the purposes of leavening. So, interestingly,by separating the symbiotic yeast/lactobacillus culture for convenience, preservatives in bread became necessary." 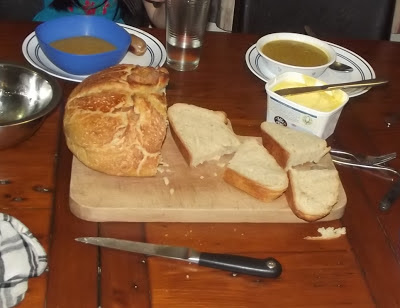 You will either need a digital scale or measuring cups, two plastic containers for storing the dough in your fridge, and butter or other stiff grease for greasing the containers.

It is important that your flour is of a high protein level. I did find a local supplier (mybreadmix.co.nz)of very good flour, it is 13.5g of protein.  Look for high protein flour, or your bread will not be good.

To lukewarm water, add granulated yeast and salt.  Stir and add flour until all the flour is incorporated.  Yes, you can use a bread mixer - or even your hands.  But I wouldn't advise it!  It's very sticky.

When measuring using measuring cups (as opposed to a digital scale), the amounts must be accurately measured.  Use a table knife to shear off the excess flour at level.

Let the dough rest for 5 minutes, and then stir vigorously for 1 minute.  The dough should be sticky, wet and shapeless.  Divide into two pieces and place in greased container that is large enough to allow for the rising (about one third to one half full).  Leave the containers at room temperature for a couple of hours, then place the containers into the fridge until you are ready to bake them, from 1-14 days (can use from three hours).  Alternatively, you can leave the containers out in room temperature for at least 12 hours before baking.

I put the dough in my fridge in ice-cream containers, leave them to rise in room temperature for a few hours (not in hot sun either, slow rising is fine), then place them in the fridge for baking the next day (letting them rise in the containers for a few hours first).  Then you don't have to bake them 12 hours from now - usually falling on 2am or some other inconvenient time! 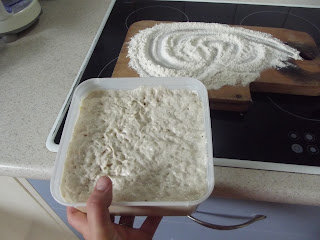 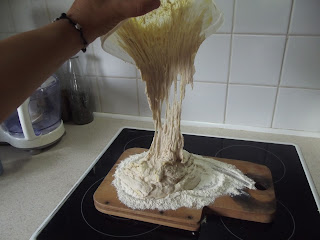 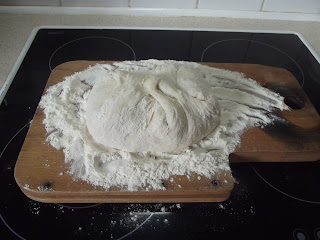 Step 1 - Get your container of dough and let it warm up for a few hours at room temperature. When you are ready to bake, flour a surface, dump the dough onto it.  Shape it by pulling up the sides to the center top.  This is called a "boule" (ball in French).  Flip "de boule" onto a floured wooden board.  Let rise for 20 minutes.

If you are using a pizza stone - as I do - add a pan underneath to get heated.  In a moment you'll add some water.  This is because it's the vapour that will make the crust.. crusty.  You don't need to do this if you are baking in a heavy pan with a lid on top - as the contained moisture will do the same thing. 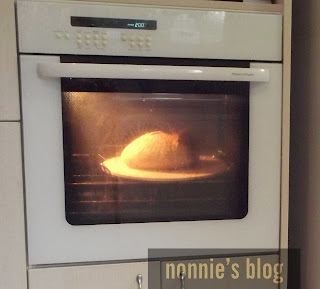 Step 2 - After 20 minutes have passed or when your oven and pot are hot enough (about 40 minutes rising time in total - too long of rising time and the boule will be too flat and spread out), open the door and...

Take the lid off the pot, and slide the boule from your floured board - or fwap the boule from the towel - or set it, baking paper and all - right into the nongreased hot pan.  Put the lid back on (using hotpads of course), and shut the door.

Pizza stone:  Add 1 cup of water into the broiler pan underneath the stone.  Bake for 30 minutes.


Cast iron pot:  Set a timer and bake for 15 minutes.  After15 minutes, take the lid off and bake longer, could be 5 minutes more, 10, or even 15 - depending on how dark you would like your crust.  I found 10 minutes was just right, but check every 5 minutes to see (using a timer!).

When it's done to your satisfaction, flip out onto a wire rack (or upside down) to cool.

Email ThisBlogThis!Share to TwitterShare to FacebookShare to Pinterest
Labels: artisan breadmaking, homemade bread, How to make no-knead bread, making things myself (and teaching the kids how to), recipes